Today I talked about the legal cannabis industry and how it’s been dominated by smart, savvy women who know a good thing when they see it.

Legal cannabis is set to be the first billion dollar industry that is female dominated, and looks to remain that way. I cited an article from an issue of Newsweek that offered information on how this happened and some of the key players in the all-woman takeover of weed, including Jane West of Women Grow, who describes herself as “1 part Martha Stewart and 1 part Walter White” – which I’m adopting as my new mantra. Women Grow is an international organization that brings toge

ther leading women in the legal cannabis industry, introduces them to other members who operate businesses and service that could be of use, such as doctors offices, scientists, lawyers, marketers, etc and educates them on ever changing policy and what they can do to further the cause.

The overall reason why women are so successful in the legal cannabis industry has to do with the fact that it’s such a compassionate industry, and this is something wom

en are just better at than men. More importantly is that it’s free of many of the barriers that older industries present to women looking to succeed. Because it’s so new you don’t have

decades of precedent classifying it as a man’s industry, which means less chances of wage gap and hiring discrepancies.

Go figure, when someone isn’t actively standing in the way of their success, women can be successful industry leaders!

In the second half of the podcast, I talked about the shift in communal magickal working to a sober environment. Cannabis and other psychoactives have a long and important history in the area of folk magic and shamanism, and it’s so disheartening to see people turning away from that in droves by deeming their rituals as drug and alcohol free spaces. If you want a bit more information about the history of cannabis (and about cannabis in general, it’s really in-depth) you should check out The Pot Book, which I used for some of the research for tonight’s episode. 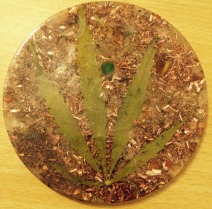 And finally – the fun stuff – HOW TO USE CANNABIS IN YOUR MAGIC. My new hemp leaf orgonite I bought at a local metaphysical store served as the main source of inspiration for this bit. What exactly can I do with this? What kind of energy will it conduct?

I found 2 books with information (which I found to be a disgracefully low number). The first is Scott Cunningham’s Encyclopedia of Magical Herbs, which is an A+ book no matter what, and a semi-obscure article in a 2007 edition fo Llewellyn’s Wicca Companion, which they no longer produce. Luckily, the author, Lisa Allen, has since uploaded a copy online that you can read for free HERE. I think it disspells the myth that all deities would be offended by the use of cannabis in a magickal setting by listing plenty of gods and goddess that you can associate with cannabis, and ways to use the (legal) forms of the plant in your magic.

Do you use cannabis in your magick? Are you a bad bitch in the legal weed game? LET ME KNOW! I want to hear all about it!